Advancing towards the Grand Line, Luffy and his crew cross the Reverse Mountain. Here, they came across a huge battered whale. He is Laboon. After the fifth stage is completed, you receive Laboon! 😍 He is only 2 stars and I probably wouldn’t use him but still, he is one character whom I remember vividly and fondly. 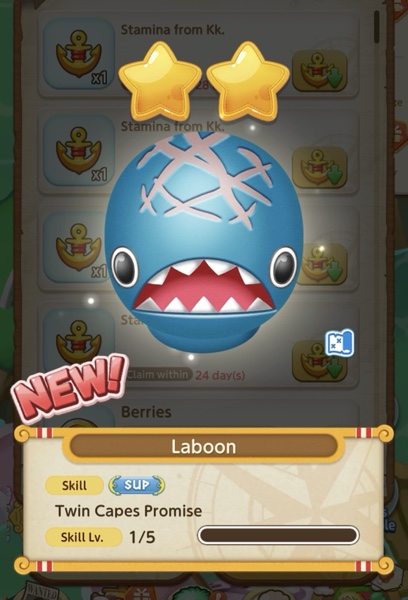 Continuing with the storyline, Crocus protects and accompanies Laboon. Here, instead of one, you have to defeat two enemies, as circled below in pink and blue. Luffy made Laboon a promise. And he drew his pirate logo on Laboon, acting as the contract between them. This part in the manga almost brought tears to my eyes. ☹️ Laboon met the Rumbar Pirates when he was lost, and followed to the Grand Line. Even though he is part of their crew, they had to leave him because he was just a baby then. From then on, he was left in Crocus’s care and have been waiting for them to return for over 50 years.

Luffy later met Brooks (the skeleton musician) who is a crew of the Rumbar Pirates and Laboon was mentioned to him. This is one tough obstacle which I really don’t like because it depletes your stamina. 😅

p.s: The time which this is posted is deliberate. 😝