I played the game without using the lottery tickets and since I am stopping it, I decided to use them all at a go.

The total number of tickets I had when I went in was 999. I think this should be the maximum number that can be kept.

Another reason for keeping is because since I needed 5 tickets for 1 draw, when I have too few tickets, the possibility of drawing the common balls is way higher. I wanted to see if I can complete all sets of the prizes at a go. I only remembered to screencap it after I had already made one draw, which I got the white ball, thus adding another lottery ticket to the total, making it 995 tickets.

When you receive a coloured ball, you will be asked to choose a prize of the amulet you want. Confirm the prize by pressing yes (left button). This is the white ball. The white ball is the most common, which you will receive no prize but a lottery ticket .

The next most common should be the blue ball. Here, there are 5 coloured amulets for you to choose from.

The third most common should be the green ball. Actually the yellow and green balls should be quite on par in terms of rarity, at least that’s what I got. There are a total of 5 different coloured food for you to choose from. These can be used in place of the usual food you buy from the stores for your frog to bring on his journey.

The next or equivalent uncommon is the yellow ball. 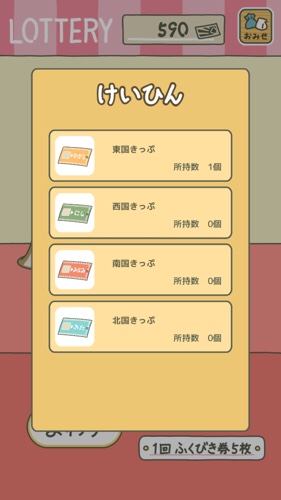 For the yellow ball, you can north, south, east, west, four kinds of coupons for you to choose. They are used in place of amulets and clovers.

Last but not least, the most uncommon for me will be the red ball. There are 4 different colours of sweets for you to choose from.

It’s the rarest because out of 999 tickets that I had, that was at least 200 chances but I only managed to get it twice, which means I only had two different coloured sweets.

Therefore, I can only use them twice before I stop this game. Haven’t used them yet so hopefully I will get something special. 😂

In summary, these are what I got with 999 tickets.